The first design is an experimental stage, the system  will be small to begin with using 3 solar panels feeding a battery bank, when this is up and running further solar panels or wind turbine could be added. The site is south facing 1 panel mounted on the house wall and the 2 other on the workshop roof this will give good comparisons in performance. Collecting data will be important for decision making with future additions to the system i.e. the number of Amp hours collected (Ah) over a set period. 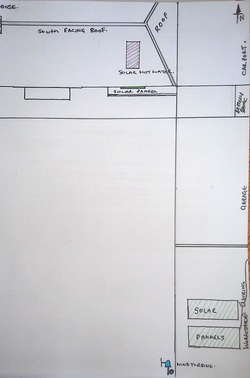 Plan of possible energy projects.
The design for the solar system will be a 3 solar panel X250w feeding a battery bank of X6 350 amp hour 6 volt batteries joined in parallel and series to make a 12 volt system of 1050 amps. The panels where purchased from a company in Birmingham which was closing down with a 35% reduction in panel price. The batteries came from an auto jumble paying scrap value testing them on site and hoping that they could be refurbished, as they were 1-6th of the price of new. Solar controller,240 volt inverter where purchased new via ebay the other components cable,switches and sockets were purchased from a local scrap yard.
The decision to mount the panels in different locations was based on the experimental nature of the system which requires ease of access and reduction in installation costs, also useful for collecting data and if required relocation of panels.
The battery bank will be located in the car port giving good weather protection, further protection of an insulated wooden box with a foam lining. The other components will be mounted next to the box giving good access for maintenance and monitoring.
This is also where a small charging station will be located for charging battery powered tools and in the longer term for charging an electric bike which I will be refurbishing in the near future for transporting materials to my allotment project .
The batteries were recycled however they proved to be in good condition once they had been inspected and charged via the mains. The wiring of the batteries in both parallel and series was difficult a to achieve but gives an even charge and discharge profile which will protect the batteries in the long term.The wiring was straight forward with safety isolators and fuses in line to minimise fire risk and aide the maintenance of the system.

Observing the site and researching the many different energy systems and how they would integrate over the long term has been an important lesson. The time taken has allowed changes to be introduced at the planning stage which has not always been the way in which I have worked.This has cost both time and money in previous projects and I will be using this approach in the future.
Producing a yield is important however in this design the main emphasis was to build the system and analysis data collected to improve out put in the long term.

The planning and location of the solar panels and battery bank were decided after a survey of the site when the requirements of  each element were determined.The materials were gathered over a period of several months as the components could be sourced.
There installation was planned with many friends helping, having a friend who is a qualified electrician and who also has a solar systems was of great benefit.The box for the batteries took only a few hours to build the solar controllers and isolator and fuses were installed before the panels.The weather was reasonable and the panels were fitted and working in the same day. 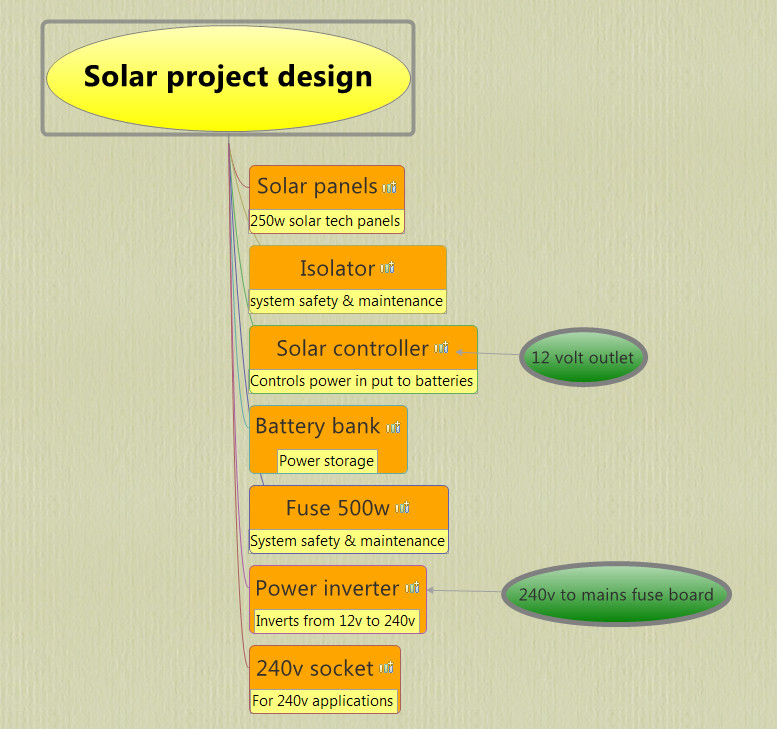 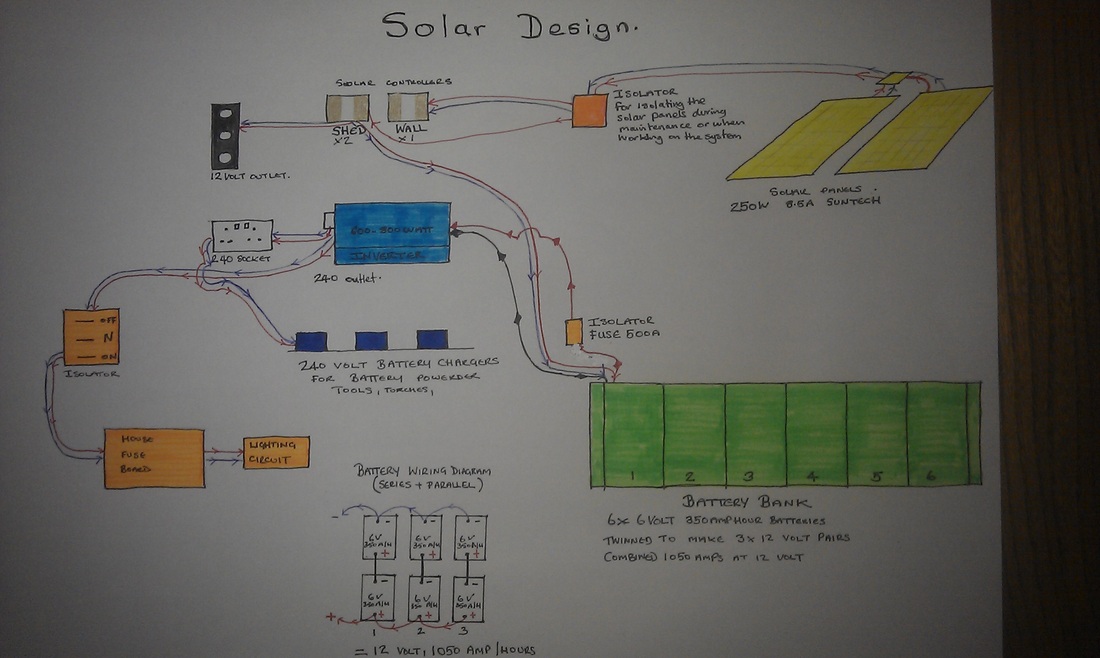 The project has been successful the day after installation it was charging the battery bank and powering my solar dehydrator.This is only the first step lighting both 12 volt and mains connection will follow soon.